I found a pattern for a knitted doll who is all rugged up in a scarf and beanie to keep him warm. After I made Julius from the free pattern from Drops Design.
http://www.garnstudio.com/lang/en/pattern.php?id=5909&lang=en
Mike thought he should have a girlfriend! So Julianna was born. The pattern calls for knitting Julius on 4 double pointed needles(DPN's)...no way I could do this I thought so I knitted him on straight needles and stitched him up the back! His arms and legs and hat also required to be knitted on DPN's. I did his hat and arms flat but when it came to his feet and legs flat was not an option so I struggled and managed to knit them in the round on the DPN's BUT they were inside out...hmmm I just turned them out stuffed them and stitched them on to his body. When it came to knitting Julianna I thought I would give the DPN's a try. Thought I had the hang of it and quickly knitted up her body then her arms which had to be stuffed before joining into the body to continue on to make her head all in one. Well small problem the arms I turned out the right way and stuffed them but her body was inside out!! I am obviously doing something wrong so I turned her body out the right way but before I tried to knit any further I went to visit my friend Lynette to see if she knew where I was going wrong. We could not come to any definitive conclusions as to why I was knitting inside out so next stop was my LYS (local yarn shop) Wondoflex. The ladies there soon worked it out...I was knitting into the back of the stitches instead of the front!! Dumb!
So home I head to rectify my knitting style...woohoo it works. Now for her legs and stitch her together. Of course she looks quite different to Julius as when you knit in the flat all rows knit as the pattern indicates you get garter stitch but when you knit all rows in the round you get stocking stitch! For the same number of rows she turned out taller than him ah well such is life:) 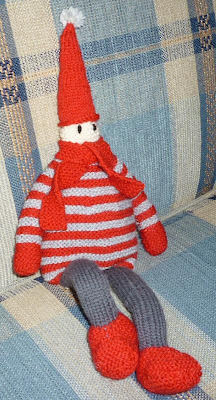 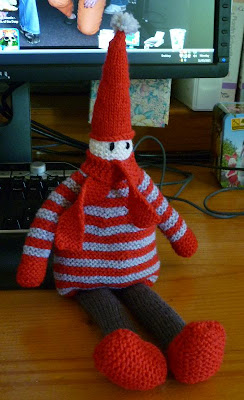 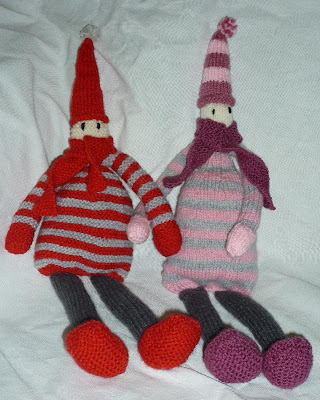