Bridget posted a link to a friends blog where they had put a tutorial on a technique called "Pullin Pastels". Thought I would give it a go. I have not used my pastels/chalks for a long time hence had not done this technique in a long time either. I used a linen grain black cardstock and on reflection think it would be better on a smooth cardstock. Rub the chalk all over the black cardstock then ink up your stamp with Versmark and stamp into the chalk. Lift off carefully and you should see the image where the chalk has been removed.
As it was not very clear I had a go at inking up my stamp with the Versamark stamping it on the black cardstock, then rubbing chalk over the top. This gives a clearer image.
The image on the left is Versamark with chalk over the top. The other is chalk stamped on with Versamark. I added some white stamped roses to the second one before I took the photo so hope you can still see the background. 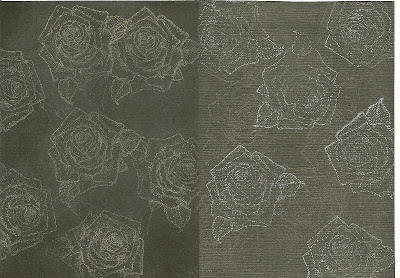 Then I made a card using the "Pullin Pastels" technique background. 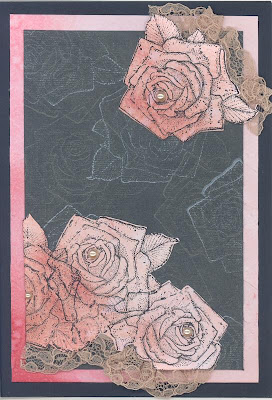