We woke to brilliant sunshine and after breakfast headed south to Hell-Bourg which is in the Salazie Crater. I am driving and feeling quite comfortable driving on the righthand side of the road, we stop for gazoil and have a chat with the service station attendant, his english is good enough for me to ask him some directions to get to Hell-Bourg. No problem follow the highway to St Andre turn right, head for Salazie and keep going. His instructions are perfect so down the freeway we go getting up to speeds of 110km! We hit St Andre only to find the market in full swing and the main road through town closed off. So a slight detour through the back streets til we manage to get past the market then back on the road headed for Salazie and Hell-Bourg. This is where we start to hit switchback roads and incredible scenery, lush greenery coming right down to the road and cascades flowing off the hills also down to the road! 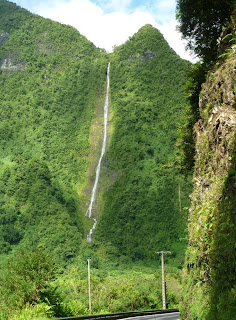 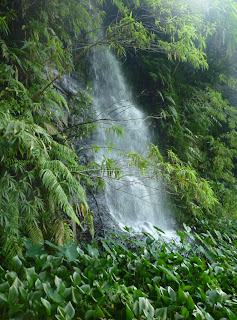 First gear is required many times as we hit sharp steep corners. Arriving in Hell- Bourg we parked the car at one end of town and proceeded to explore. Walking down the main street Rue General de Gaulle. We stopped to buy some postcards and stamps wandered past some old creole buildings that have been restored down to the far end of town where we found a statue called "the Soul of France" which we had read about. She has had a few incarnations and quite an checkered history.
http://en.wikipedia.org/wiki/L'%C3%82me_de_la_France 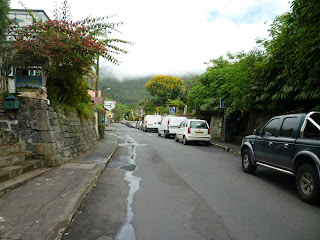 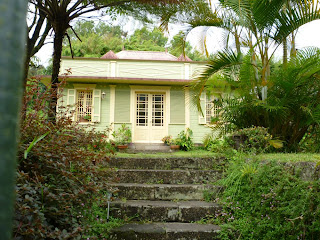 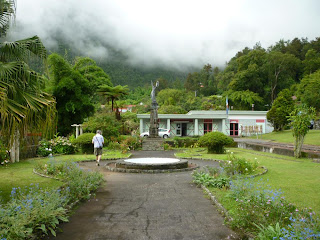 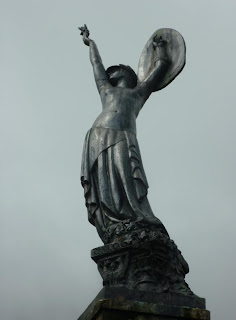 On past the statue we walked through a small park where council workers were working hard to keep the lush vegetation under control. As the park was on a steep bend in the road one worker was on the lookout with his airhorn ready to sound if any cars were coming down the hill as they were also trimming the roadside verges.  Back up the hill to the shops where we bought ourselves a sandwich ...baguette avec jambon et fromage. It was only 1130 but everything closes at 1200 for  2 hours! We then went into the fruit shop for a nice fresh banana as we were about to leave a tropical shower came down and we were caught briefly til it passed. On our way back to the car we got sidetracked down a street where we could see a magnificant mountain covered in cloud. We wandered down toward the mountain watching the cloud lift, on our way we passed the local church, watched massives spiders sitting in their webs high above the fences of the local houses and saw incredibly beautiful plants of many varieties. At the end of the street we came to the local cemetery which was a like an exotic garden. Here we saw one of the enormous spiders close up. 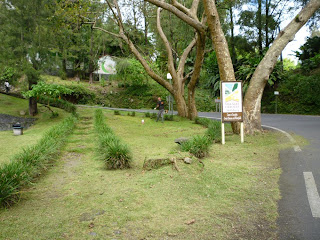 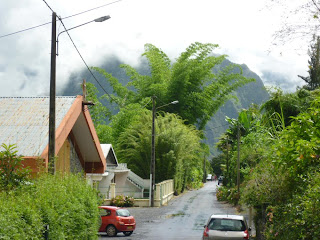 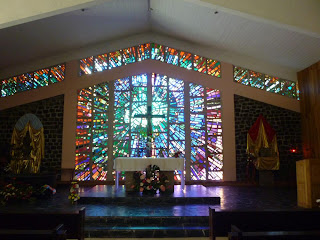 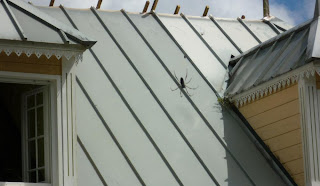 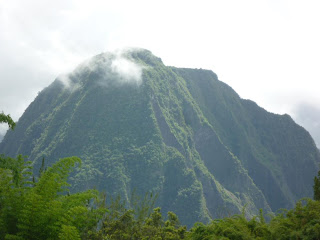 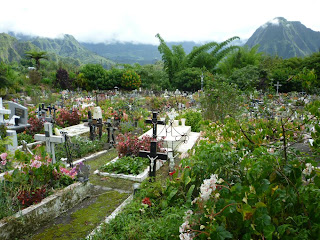 ﻿﻿﻿﻿
After we left Hell-Bourg we went down the coast again hoping to find a spot famous for its many waterfalls but we took a wrong turn and ended up on the beach in St Benoit. This was not a problem as it was just another new place to explore. We had a brief stop to eat our second baguette ( forgetting when we got them at lunchtime in Hell-Bourg that one sandwich is actually a full baguette﻿﻿). The beach such as it is was really lots of rocks and creeper growing over everything. We also spotted Vacoa trees..what here at home we would call a Pandanus tree. 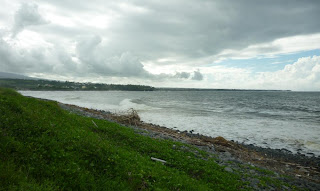 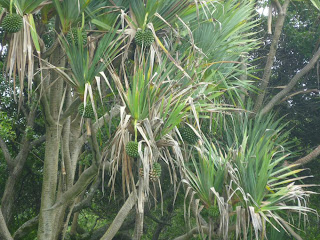 We were both getting rather tired by this time so decided to head back to our hotel in St Denis..only to get caught in peak hour traffic:( 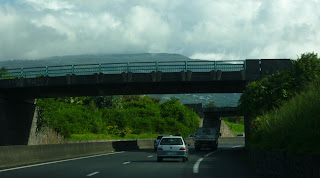 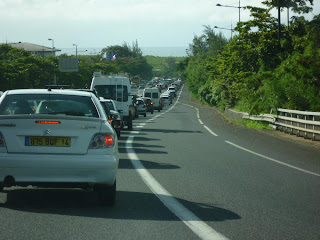