We awoke to another sunny day and are going to head south down the east coast. While driving through St Denis back streets trying to find our way onto the freeway I got a little stressed trying to negotiate the traffic! I kept going and settled down when we found the correct road. Down the freeway through St Benoit and our first stop is St Anne where turning a corner in the road we came across this incredibly ornate church. We got out of the car and were a little stunned by the heat.  At the entrance to the church there was a little stall selling religious souvenirs and books, passing under the scaffolding (the church was under repair) I was struck by the stench...eww mold and stale wee. In we go and it is a fairly plain unadorned interior until we went into the side chapel of St Therese...WOW the painted plaster work was rather over whelming. 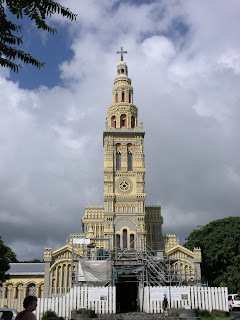 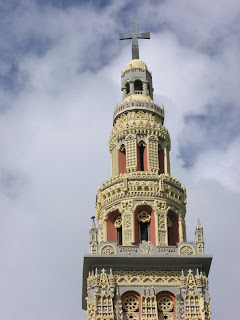 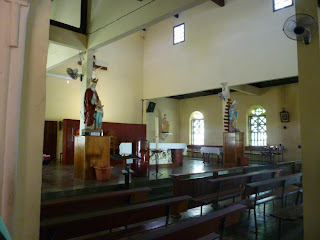 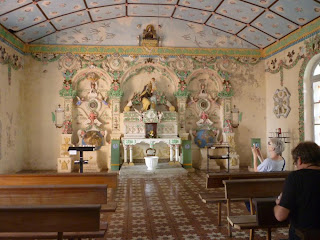 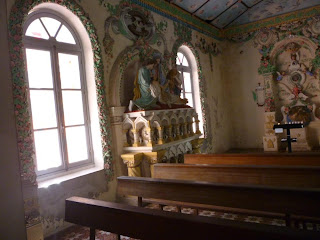 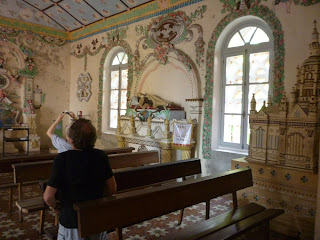 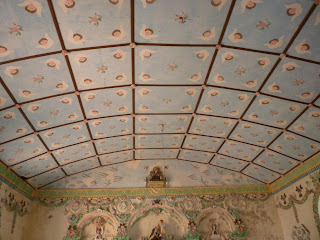 Next stop was the Suspension bridge over the l'Est river. This bridge was completed in 1894 and decommisoned in 1979. 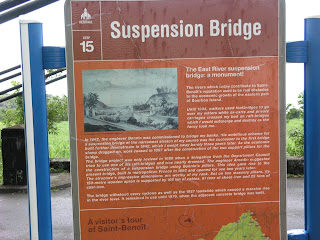 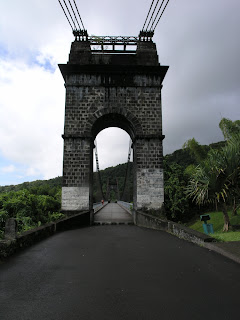 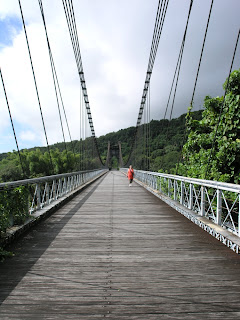 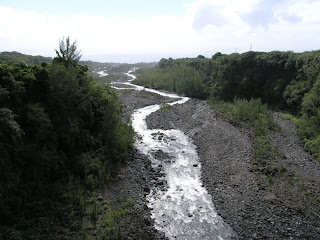 After leaving St Anne we came to Piton St Rose where after a major eruption in 1977 the lava wiped out most of the town. One had to go looking for the areas without regrowth. 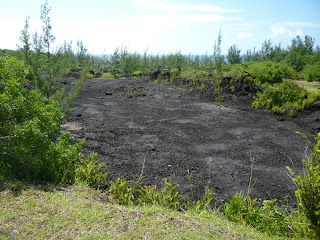 We headed off the main road to visit Anse du Cascades where the waterfalls come down the hillside to the bay. 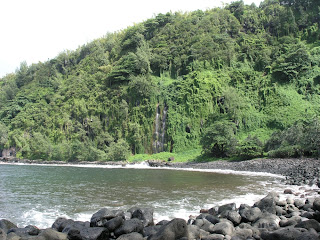 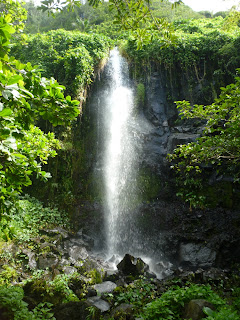 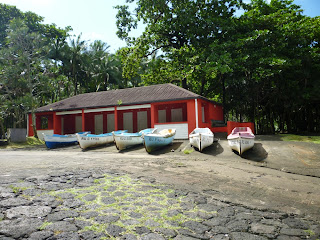 We had not organised our lunch before siesta time so we stopped at the first restaurant we came across..."Belle Air". There were a few tables of customers sitting inside the open floor length windows...the breeeze being very pleasant on such a hot day. Lets say it is just as well we were not in a hurry as we arrived at about 1215 but did not get our main course until around 1330!! For 18 Euro we could have entree and main course so chose this option to check out local cuisine. Mike had Beignets au Fruit du Pain (battered bread fruit) served with chilli sauce and I chose Gratin of Fruit de Mer. Sounds exotic...was in fact unidentifiable seafood in white sauce, Mike's choice tastier. Main course I chose Cari Poulet...local curry chicken and Mike had Poulet au Vanilla, these were served with rice, lentils and rougail (chilli salsa). Again I made the bad choice, dry and mostly bones, Mikes chicken was caremilised with the vanilla and meatier. We decided against dessert or coffee as the afternoon was slipping away. As we left another customer sitting outside having a cigarette wished us Bon Journee! Merci. As we were getting into the car a man on the side of the road queried where we were going in french...quickly the woman who had wished us bon journee explained to him that we spoke anglais...so again he asked in perfect english this time where we were going and where we were from? We had a short conversation before heading further around the coast toward St Phillipe. We came across lava flows dating from 1998 to 2004 all with varying stages of regrowth. 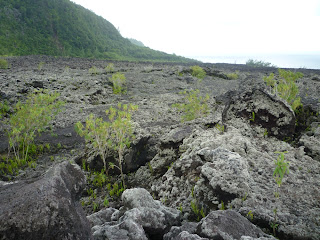 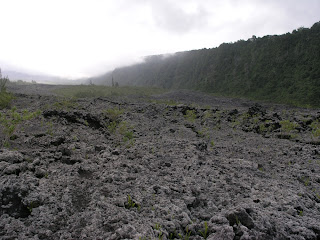 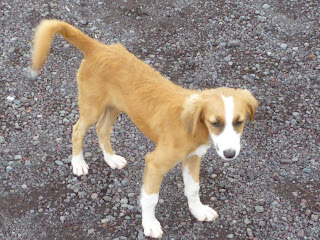 This little guy was representative of a lot of feral dogs we saw wandering the island. They were all scrawny and rather slow, we were amazed not to see more lying on the side of the road as they took no notice of cars! 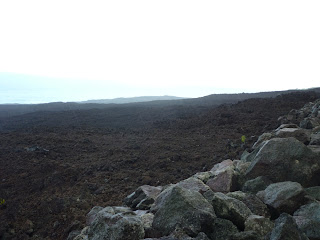 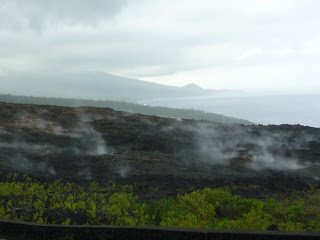 At one point we could see steam coming off the lava...it was raining at the time but something under there was still hot!
We stopped in st Phillipe at an artisan bakery and bought a baguette, then down the road to the local fruit and veg shop to get a tomato and a couple of bananas for our tea.
By this time is was 1630 and time to head back to St Denis for the night, we decided to take the back roads in the direction of Foret du Mouravain and headed up into the hills through fields of sugarcane. Here as all over the island the gutters are extremely deep and wide to cope with the tropical downpours. 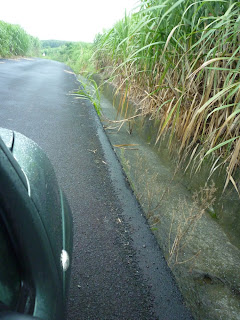 We climb quickly up into the clouds which have been sitting on the hills all day. The road is steep, twisty and narrow no one else is silly enough to come this way except a few cyclists! They ride everywhere even on the freeways! We see lots of signs warning of the danger of flooding and not to cross any ford if there is water over it! All the fords we had crossed so far were dry then the rain hit us, visibility was down to about 20 metres at times which made the driving rather treacherous! We crossed a couple of fords that now had water gushing under them. A 4 WD passed us and wagged his finger at us in warning...we soon found out why as the water was over the road and flowing very fast. Time to turn around and take a different road home. 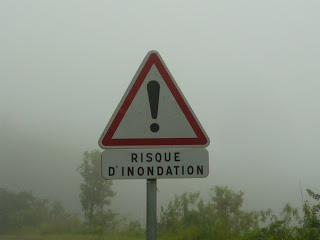 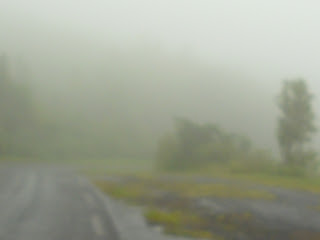 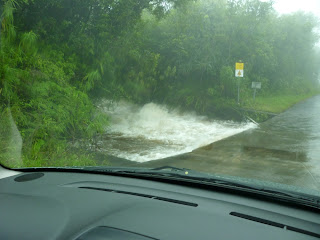 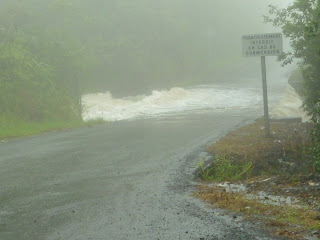 We found a better road down to Piton St Rose and made it safely back to the freeway
and home to our hotel in St Denis by 1800. We were both exhausted from our days travels so lay down for a nap...next thing we know it is 2015...time for a tomato baguette and banana for tea. Next we download photos and check the email.
We had done some washing and hung it in the bathroom before leaving but with the door closed all day it was still quite damp so we brought it out into our room to dry off over night. Tomorrow we head around to the west coast to stay in L'Hermitage des Bains at La Vacoa. 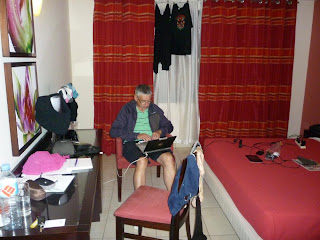