This seems to be a place very few Australians have heard of and I have to admit until about the 1st of April I also had never heard of it. NOW I have not only heard of it I have been there and would recommend others go check it out too.
It is french territory, Department 974 and is in the Indian Ocean south west of Mauritius.  http://www.reunion.fr/
Mike read about it in an email from the French Tourist Office (something we get on a regualr basis) and wondered where the heck it was. A bit of research later and he was convinced it was the sort of place we should visit.
Now on one hand he is saying we are poor but on the other what a great place for a holiday. Well not being slow in coming forward I thought I would do a little research myself and work out the hows and wheres of getting there.
I discovered a french airline called Air Austral flies direct to Reunion from Sydney on a tuesday and flies back to Australia on a sunday. 12 days sounds like the perfect holiday to me. So on monday the 2nd of April we booked and flew out on the 17th! The internet makes life so easy for holiday planning. Before we left home I had booked car hire, hotel accomodation, inquired about helicopter flights over the island, dolphin cruises, learned a little about the islands history, what to expect of the local flora and fauna and what sort of weather to expect.
Then we just had to wait 2 weeks til our departure date which was planned to coinincide with a visit from our daughter Emily whose ship was sailing into Melbourne on its way to New Zealand. 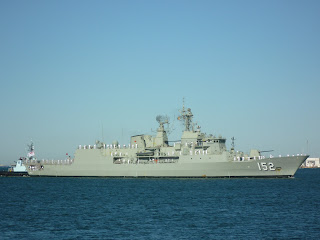 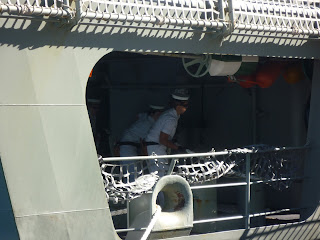 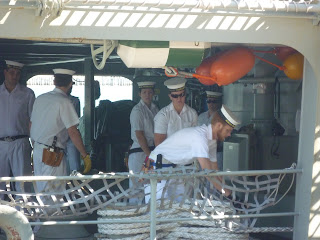 All smiles as her duties are completed. 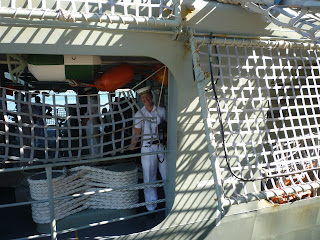 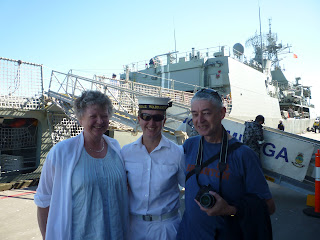 It was fabulous and made us very proud to see our daughter (in dress uniform) lined up on the deck of HMAS Warramunga with her fellow sailors as the ship steamed up Port Phillip Bay and docked at Station Pier.


It is a 12 hour flight from Sydney so we arrived at 1830 tuesday evening Reunion time.
No issues getting our luggage and going through customs. We headed to the info counter to find where to pick up the car we had booked. Out the door over the road and there is a special building with all the car hire firms represented. We had a voucher as it was all paid for before we left home so we headed to the desk we were directed to by the info person only to be told we were at the wrong place and should try a different place. After talking to them we were directed to a 3rd company. Finally someone who would honour our voucher but had no record of our booking!! His problem he said BUT we do not have an automatic car as ordered only a manual Citron 3 gazoil vehicle. No worries we just want a car and to get to our hotel. The car has a few dings and is out in aisle 2 see you in 12 days back here at 10.30am. No instructions on returning the car a point that would prove an issue later. It must also be noted that another person approached the car hire man only to be told he had NO cars left! So we were indeed very lucky to have any car at all!
Now I thought I was being clever printing out instructions on how to reach our hotel from the airport...NOT SO. The instructions were hoplessly inadequate in that we could find none of the mentioned streets and not only was it dark and wet, we had been up for about 24hours, we were driving a lefthand drive vehicle on the righthandside of the road..the odds were rather stacked against us. After driving around and around for sometime we pulled into a carpark and tried to ring the hotel only to get someone telling us in french we had the wrong number (or something like that). While driving around I had seen signs to a Mecure Hotel (this we knew to be a large international chain) so we figured someone would speak english and assist us to hire a taxi to follow to our hotel. We found the hotel which was surrounded by a large fence with keypad/intercom access needed...I took the opportunity as a car left to walk in and approach the recption desk. The young woman was extremely helpful (and spoke beautiful english) she rang a taxi and told him of our dilemma all in french of course:). He arrived about 10 mins later and I drove with Ishmael while Mike followed in our hire car. We had a great chat and Ishmael was curious to know whether I ate kangaroo and whether I would rather eat it or beef:) He led us safely to Hotel Bellepierre where we were to spend the next 4 nights. Ishmael gave me his business card just in case we needed his services again while on Reunion...pleased to say we did not... lol  It was by now 2100 and again we found friendly and helpful staff (with excellent english) who booked us a table in the restaurant for dinner after we had been to our room to freshen up. We enjoyed a wonderful dinner and realised 2100 really is not late for dinner if you are french!
Needless to say we slept VERY well.