On the 15th March 3 of us went to the Langham for High Tea to celebrate Val's birthday. On our way in we noticed a tall perspex cube full of Lindt Chocolate rabbits and eggs! Then we noticed you could win a portion of them if you guessed the correct number of objects in the perspex cube! Well we just had to be in it. I chose a random number out of the air, not sure how Val chose her number but Lynette put some thought into it and after I counter roughly 40 chocolates along one side of the cube she set to work figuring out how many were actually in it. She wrote down her guess and put it in the box. We left not dreaming we would hear any more.
Well a few weeks later (after Easter) Lynette got a phone call to say she had won equal 4th prize and would she care to come and collect her box of Lindt chocolate. It will be too heavy for you to carry home on the tram Lynette was told. I volunteered to drive her in to collect her prize. Such excitement needs sharing after all. Lynette was rather sceptical about the size of her prize until we saw the box!!
A nice strong young man carried it out and put it in the car...wishing us happy eating with a big grin on his face.
We got it home to Lynette's and put the box on the bathroom scales...very tricky trying to see what the scales actually said but we figured about 15kgs! That is one hell of a lot of very fine Lindt Chocolate! Upon opening the box we were greeted with the sight of hundreds of rabbits and eggs in different sizes as well as carrots. Lynette got the pleasure of sorting through them all and very generously divided them up among her family and friends. I believe on weighing them out she discovered there was more like 13.5 kgs of actual chocolate...still a LOT of chocolate.
The generous selection that was given to me has been shared with anyone who walks in our door:) I keep encouraging my husband to eat them so I am not tempted...much as I love chocolate it is not good for the waistline LOL.
By the way there were over 7250 pieces of chocolate in the cube! 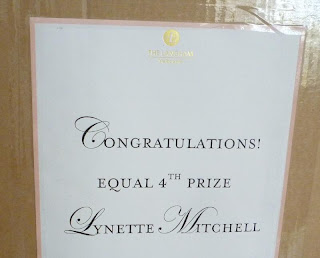 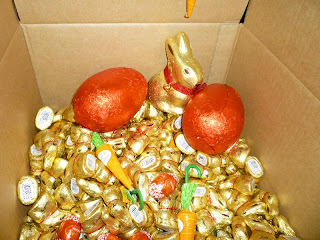 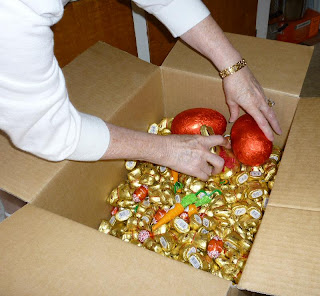 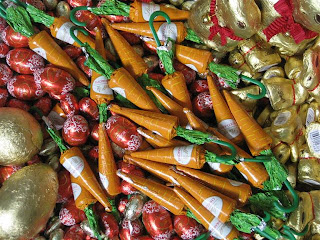 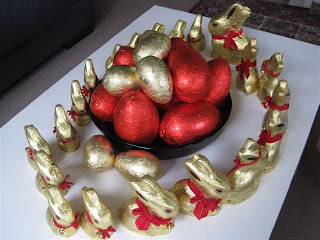