Hi Faye, lovely to hear from you. Would like to catch up and can't think of any other way to contact you...so please email me with your new Aussie email addy.
Blogs are handy things:)
cheers
Barb
Posted by Barb at 21:48 1 comment:

Finally a travel tale! We enjoyed our 4th trip to this great free Jazz Festival on the Queen's Birthday long weekend. We found this event by accident 5 years ago and have headed back each year to spend 3 days enjoying free music and indulging in some good food and seeing the sights of Sydney. This year we found a serviced apartment right on Darling Harbour at a good price, extremely convenient location and very nicely appointed to boot!In different years we have enjoyed cold, wet and sunny weekends. This year we went prepared for rain! We were not disappointed, Sydneysiders wish it would stop we wish it would come down the coast to Victoria. We took the 7am flight to Sydney fingers crossed we would not get fog bound at Melbourne Airport as we had been experiencing foggy mornings all week. All went well and no hassles as we had booked in online the day before...ahh the benefits of modern technology! I had been resting my knee all week after going for my first bike ride the previous weekend, I was not sure how it would cope but was determined to go anyway. I took my trusty icepack and a bottle of Voltaren. We arrived in Sydney to brilliant sunshine...woohoo! A taxi to our accomodation and the room was ready so a quick book-in and then off to get some breakfast and visit the wool shop that has its sale this time every year. I was prepared with a pattern and found something on the bargain table to suit. Back to our room on the monorail to dump the wool then down to the harbour to listen to some music. The sunshine disappeared and was replaced with grey skies as I said we were prepared and were happy to sit under our umbrellas listening to great music as the rain was light and short lived.
Sunday we returned to the restaurant we had eaten in the previous day and indulged in another yummy breakfast. A bit wet this morning so we headed around to the IMAX theatre. Never having been to one before we thought it a good way to pass some time til the music started. The Rolling stones film was on but not til late afternoon so we saw a 45min film about the sea. Fabulous fun sitting there with your 3D goggles on watching the fish and sharks come out at you, making you want to reach out and touch them! It was also relaxing and both of us snoozed briefly...LOL After this we needed a pick me up so headed to the Lindt Chocolate Cafe for a hot choclate and piece of cake...mmmmmm to die for...LOL
Sunday night the concert featured James Morrison and Deni Hines followed by a fireworks display!
Monday we returned yet again to same restaurant for breakfast. Then back to pack up and store our luggage til we were ready to head to the airport in the evening. Down to Darling Harbour to check out an internet connection to book seats on the plane, we went through the procedure no worries picked what we thought would be good seats then realised we had no printing facilities...dumb! Found another cafe that had printing facilities but could not log back in. Rang Virgin Blue to be told we could not log in for security reasons and that our seats wouls be booked and just go to the service desk when we got to the airport. Cool. We spent some time sitting in Tumbalong park under our umbrellas listening to the Royal Australian Airforce band with guest artists before heading back to the Convention Centre Forecourt stage for a great end to the festival. There was some more music to be heard but we opted for a late lunch of fish at a restaurant in the Harbourside Complex as it was nearly 4pm by now. OK after lunch there was still time to catch a little more "funk" style music before we headed back to the apartments to collect our bags and await a taxi to the airport. We had a good run out to the airport (about 15mins) where it was frantic but the taxi driver was not bothering to wait for a return fare as it would be a case of sitting around he reckoned for about 2 hours before he got to the head of the queue! And having to pay for this privelege to boot! There was a slight delay in boarding our pane home but we arrived a few mins early in Melbourne (must have been a tail wind). Our luggage was off the plane almost quicker than us and was ready minutes after we arrived at the carousel...amazing! Back to the undercover long term carpark to retrieve our car and we were home before midnight. So that was Darling Harbour for another year and we are looking forward to next year already:)
Posted by Barb at 10:36 2 comments: 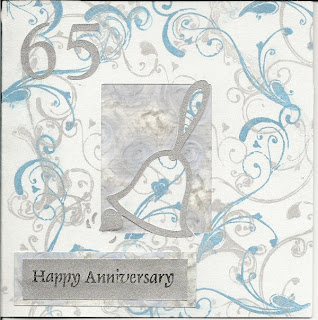 Today I used my Cricut to make a card for a couple who are about to celebrate their 65th wedding anniversary...WOW !
Posted by Barb at 18:42 2 comments: