Saturday 17th March and at 9am we decided to go on a little road trip to South Australia...hey it is only about a 10 hour drive. Well we were packed and out the door by 10am, we are getting good at making a quick escape. Shortest way was along the Western Freeway to Ballarat then the Western Highway to Ararat, Horsham, St Arnaud, Kaniva, across the border to Bordertown SA. From here we headed to Murray Bridge, it was getting late and we started to think about where to stop for the night, on a quick drive through Callington (an old copper mining town) we found no accommodation so continued on toward Adeliade. We kept going and turned off the highway at Mt Barker, still not finding anything obvious we headed into Hanhdorf a lovely little village in the hills that was originally settled by German migrants. After a few knock backs at full motels we headed out of town being advised that there was a hotel on the way into Adelaide we might find a bed for the night, we went past a sign advertising vacant rooms in...so in we went and woohoo they not only had a room for the night but it was considerably cheaper than some of the others we had looked at .
It was clean and comfortable. As by now it was 8pm we headed into the hotel dining room for a buffet dinner...first mistake next was to have breakfast there the next morning, ah well live and learn.
We went for a wander down the main street of Hanhdorf the next morning and wished we had not eaten already as there lots of little cafes ready to serve us a delicous breakfast from what we saw others having.
We checked out of the motel and headed south to the Flerieu Peninsula driving along the back roads just taking our time and checking out the scenery. Lunch was at the market in Strathalbyn. A lovely little town, see photos below.
Then we drove down into Victor Harbour to look at the view out over the sea. On the way back we stopped at the Alexandrina Cheese Company for a cuppa and a cheese tasting plate for afternoon tea, There was a live female country band playing and quite a few people around. We opted to sit outside (sorry ladies but the music was awful). This time we thought about the night's accommodation earlier and figured we would head back to Hanhdorf. We checked into the same motel(different room) and did not make the mistake of eating at the hotel...we instead went next door to the local pizza parlour but found on the menu pork belly with prawns and salsa and crisp duck legs with salad. WOOHOO we hit the jackpot..it was a yummy meal, the staff were friendly and efficient and we were entertained by the next table of women and 2 blokes celebrating one of the girls 40th birthdays. A pre-requisite for this party was that you wear a fascinator ( a type of small hat)...and the blokes wore them too!
Breakfast the next morning was partaken a a cafe at the other end of town and was also delicious. Round 9am we headed off home opting to go the long way via Mt Gambier so we could see the Blue Lake, which is in a volcanic crater.
We stopped in Naracoorte for lunch then onto Mt Gambier...it was a hot day and getting late so we stopped for a quick photo shoot then headed toward the border and Victoria. 4.30pm saw us in Casterton in need of a cuppa and a loo stop..we also had an early tea of homemade pies from the local bakery. We made it home by just after 9pm so our long weekend ended.


Looking toward Mt Langhi Kiran as we head off down the road to South Australia. 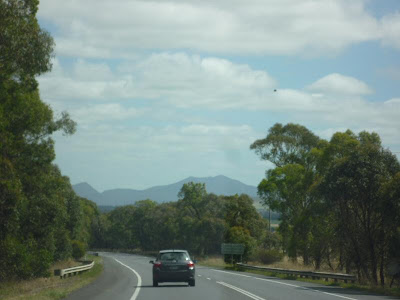 We had a nice lunch of salad and cheese in Beaufort and there we saw this intriguing structure and worked out it was a shelter for the crossing supervisor...way to go Beaufort. 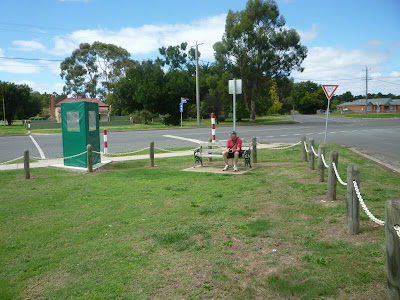 This giant Koala we found in Dadswells Bridge when we stopped for a break. 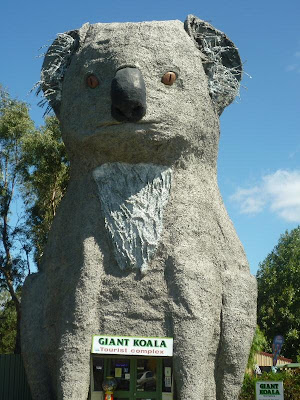 Looking down the main street of Hanhdorf. 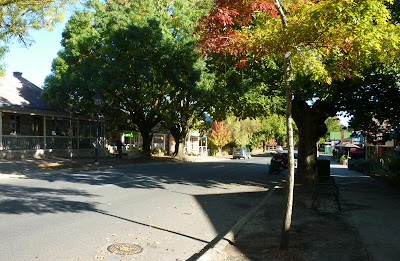 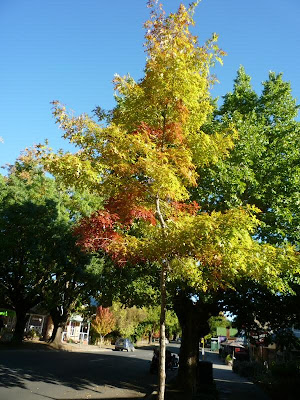 the trees lining the streets were starting to take on the beautiful autumn colours of reds and golds. 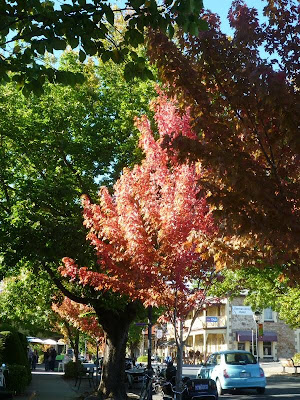 Get a load of the door height of this old building, Mike would have had to duck to get through. 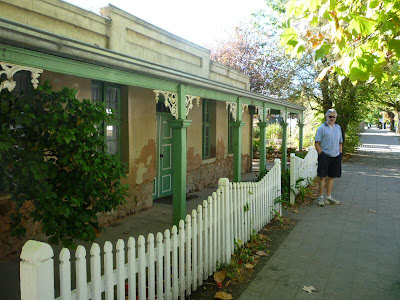 Now this is for the well heeled motorcycle traveller, complete with trailer to carry the luggage! 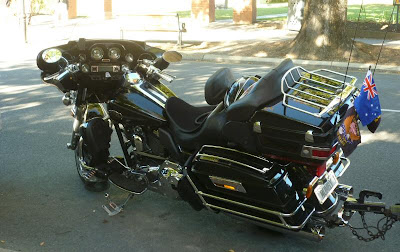 an interesting sculpted cypress tree in main street of Hanhdorf right outside the most amazing cake shop...we were strong and did not indulge:( 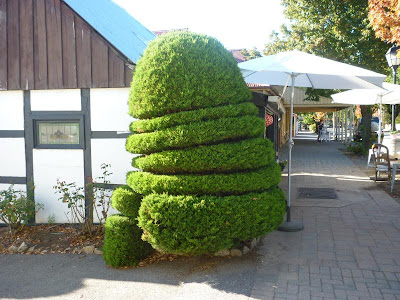 This wonderful stained glass fountain was erected to commemorate the founding families of Hanhdorf in Alec Johnson Park. 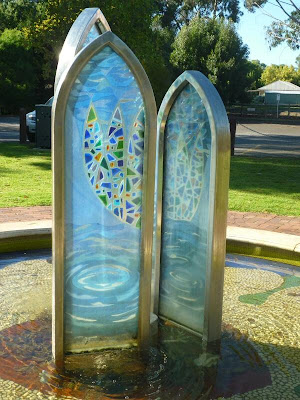 They certainly knew how to make a bank secure back in the good old days...lol Check out the metal door grating. This is in Strathalbyn a town in an area settled by Scots migrants. 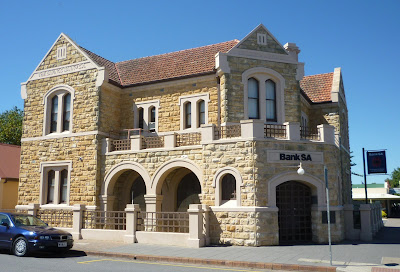 Close up of a corella. 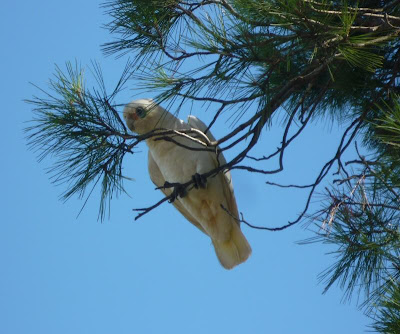 Look closely and you can see that the white dots in the trees are actually birds! The place was alive with corellas...we saw them fly on mass from one side of the gardens to the other...amazing. 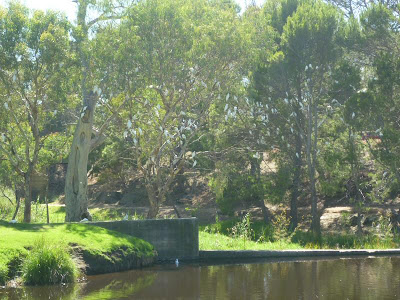 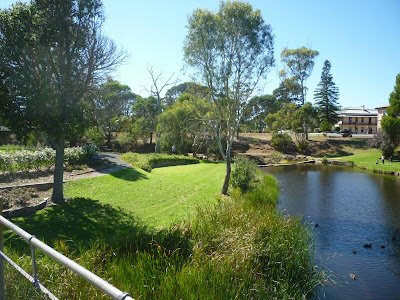 Looking across the bridge of the Soldiers Memorial Park in Strathalbyn. 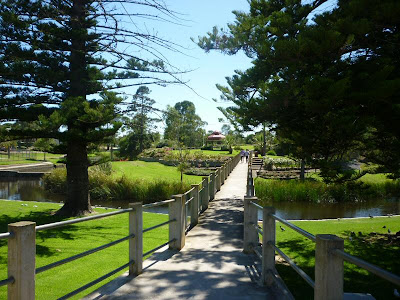 Just loved the colour of this rose in the Soldiers Memorial Park, Strathalbyn. 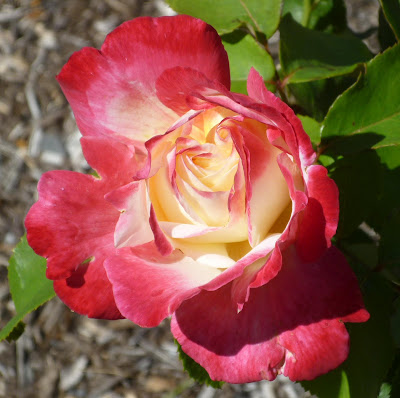 There was a bee sitting in this rose. 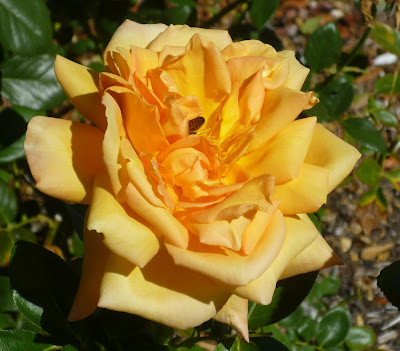 An apricot rose in the Soldiers Memorial Park Strathalbyn. 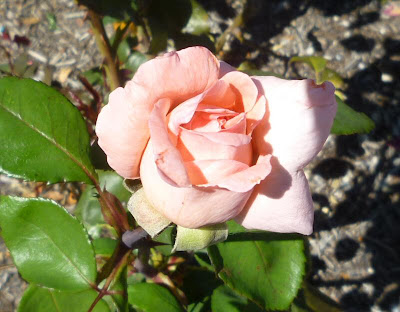 We had a very pleasant cheese tasting plate for afternoon tea at the Alexandrina Cheeese Company on the Flerieu Peninsula. 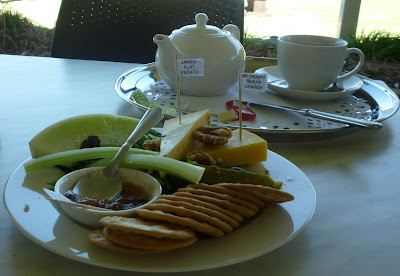 This cow sculpture was outside the Alexandrina Cheese Company. 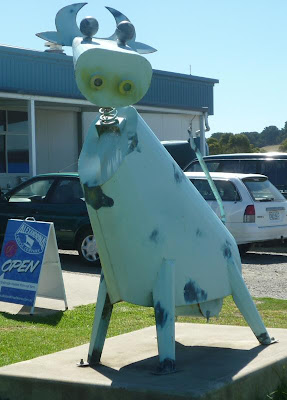 Here is Mike sitting in the whale with Victor Harbour in the background. 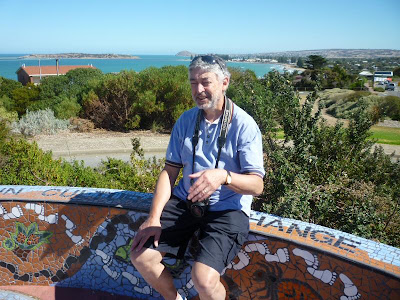 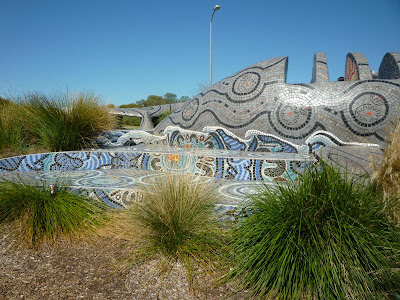 We stopped at a lookout over looking Victor Harbour which was a massive whale mosaic dedicated to friendship between a chinese city and Victor Harbour. 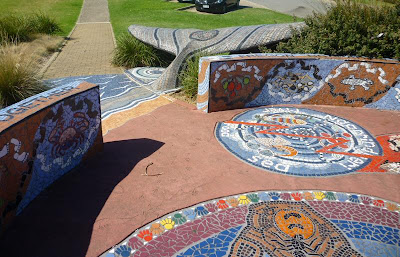 The countryside was rather dry. 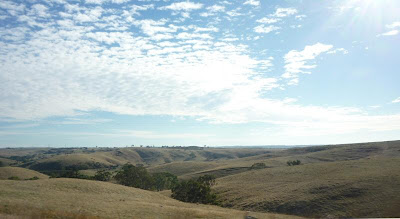 I could not resist taking a picture out the cr window of this amazing cloud formation we saw as we were driving through the South Australian countryside. 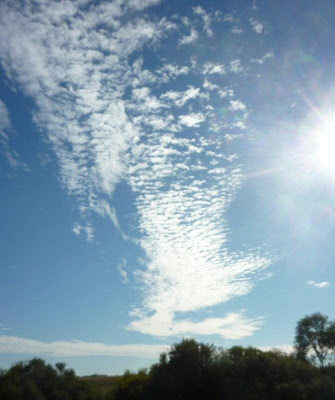 We saw lots of massive grain silos along the road most with a train station nearby. 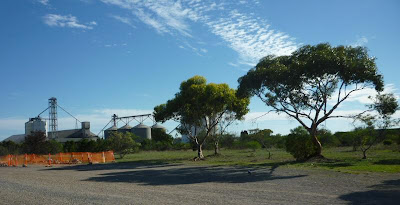 There were acres and acres of vines beside the road in the Coonawarra district.

This are the flowers of an interesting tree we spotted while having lunch in Naracoorte. 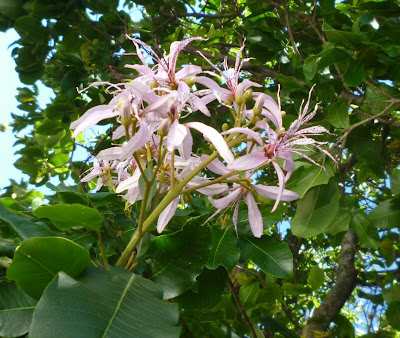 These interesting seedpods we saw on a tree (which we have yet to idnetify) in Naracoorte where we stopped to have lunch on our way home. 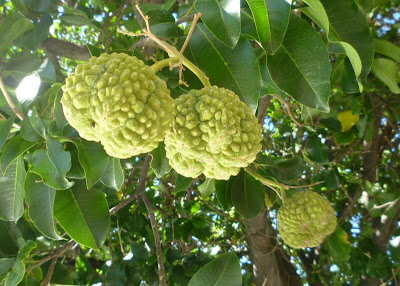 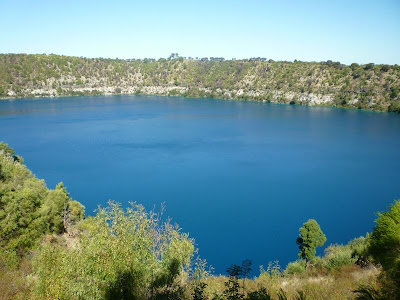